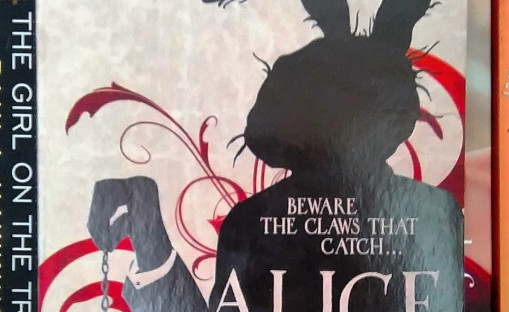 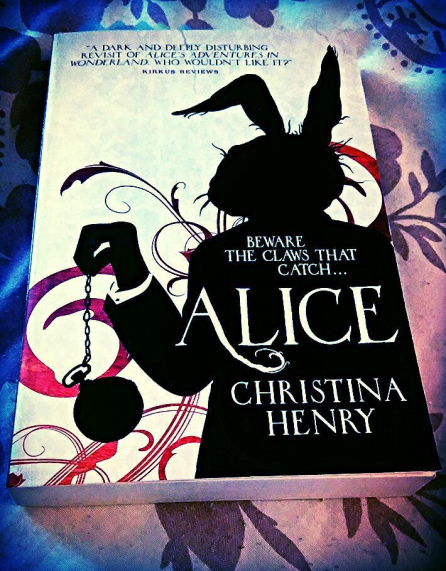 This book really caught my eye when I saw a review of it thanks to the wonderful world of Book Blogging! Ever since then I knew I had to have it and read it, IMMEDIATELY!! So that’s what I did. I already had high expectations of this book before going in to reading it, which made me a little dubious before I even started the book, because I didn’t want to be disappointed by my own high build up.

Alice, is the first book in the Chronicles of Alice series, which is an Alice in Wonderland retelling of sorts, but a much darker and disturbing version. I love it! Let me give you the books actual description before I give you my review of this thrilling read;

“In a warren of crumbling buildings and desperate people called the Old City, there stands a hospital with cinderblock walls which echo with the screams of the poor souls inside.
In the hospital, there is a woman. Her hair, once blonde, hangs in tangles down her back. She doesn’t remember why she’s in such a terrible place – just a tea party long ago, and long ears, and blood. . .
Then, one night, a fire at the hospital gives the woman a chance to escape, tumbling out of the hole that imprisoned her, leaving her free to uncover the truth about what happened to her all those years ago.
Only something else has escaped with her. Something dark. Something powerful.
And to find the truth, she will have to track this beast to the very heart of the Old City, where the rabbit waits for his Alice.”

Sound awesome? Because OMG this book was soooo amazing!!! That wasn’t subtle at all, was it? This book begins after Alice has already met the Rabbit, and let me tell you that it’s not the friendly rabbit we’re all used to and maybe would have expected when it comes to any story of Alice in wonderland. She is found after some time, wondering around and covered in blood, mumbling about rabbits and eyes, and if that’s not bad enough, her friend Dor has not returned with her. Her parents, not getting answers about what had happened, about the still missing Dor and with Alice still going on about the Rabbit, they put her into a hospital (I believe a mental hospital), deep in the Old City. Over time she forgets what happened to her, except for the tea party, the long ears, the colour of the eye and the blood. While there she meets somebody in the room next to hers and they start talking. And that is really where the story really starts and Alice’s new adventure to rediscover her lost memories begins. But is it an adventure she wants to undertake, and are they memories she want to have back?.

I can’t remember the last time I got completely engorged in a book like I did with this one. I became so antisocial while reading it, because I just didn’t want to stop reading this book for any reason whatsoever! The storyline was so gripping and I just wanted to keep going and to go on the same adventure as Alice and Hatcher as they went along. It was so good and so captivating, and everything that was written was just so perfectly expressed that I could imagine it all so vividly, that it was like it was all being played out in my head. I don’t even think I took the time to actually eat properly. I definitely didn’t take the time to set the book down and cook a proper home cooked meal that would’ve taking the time to do so, so luckily I was very quick reading this book.

The characters in this book were gripping and so easy to understand. Of course we are going to have to discuss Alice. When reading this book and you are told that it’s an Alice in Wonderland retelling, so you instantly get and bring the Alice from the Lewis Carroll classic to mind, before you even open and read this book. But once you start reading, you get a character all of her own. You see her grow and develop throughout this entire book, which is so seamlessly done, that seemless is the best word to use because of how outstanding it is. You don’t see this sudden jump in character, you see a growth and you get to understand her and see why there’s a growth in her character, which is something you sometimes don’t get to see and is often missed. One of these changes, is thanks to another character, Hatcher. This is the character that Alice meets, or hears, in the room next to her in the hospital at the beginning of the book. I don’t want to give too much away, as I want to keep my reviews spoiler free.

What was amazing, for me anyways, was when I would hear words that would connect me to the original Lewis Carroll version of Alice in Wonderland, this would make me smile. When I would here simple things such as, the tea party, the cakes and drinks that affected their size, the Jabberwock, the rabbit, the Cheshire and his grin, I can go on and on. It all just made this book that extra bit perfect for me. I love it all. Yet with all of these little reminders of Carrolls version and the constant reminders of this being a retelling of sorts, you also got this uniqueness from it, which I didn’t expect. You get this book, that is so original on it’s own merits, with so much adventure, excitement and story.

Then how they ended this book!! I so desperately want to quote the ending so badly, but omg what a spoiler that would be, or more like a teaser, maybe? I always said that I never wanted to give away spoilers in my reviews, but this last part of this book, OMG!! I won’t do it. I have fallen in love with this book, that it’s sequel, Red Queen (Chronicles of Alice #2) by Christina Henry, has already been bought with speedy eagerness and will be dived into, read and reviewed with haste. P.s. If you order this book from amazon, don’t look at the amount of pages it says the book has. Before I ordered my copy I was told it was going to have 198 pages, however when my book arrived it had 325 pages, which was better for me. The same for Red Queen, saying 198 but actually having 313 pages.

I can’t recommend this book highly enough. READ IT!! But beware of its dark, violent and possibly disturbing images. Now that you’ve been warned, GO AND READ IT!!! Definitely my biggest recommendation so far this year.

Have you read this book? What did you think?

This is a text widget, which allows you to add text or HTML to your sidebar. You can use them to display text, links, images, HTML, or a combination of these. Edit them in the Widget section of the Customizer.